Since I attended Cage Warriors 104 in April, I realised I’d attended 3 different Cage Warriors shows at what is now the Viola Arena (CW97, CW100 and CW104) and sat in 3 different disabled seating sections (Cageside, Block 15 and Block 17). With that in mind, I thought I’d expand on my earlier CW97 post  and compare the 3 sections and the pros and cons of each. Disclaimer, this only relates to the seating for Cage Warriors events as I haven’t attended the arena for anything else.

Cageside: We were cageside for CW97 in September, my first experience of a live Cage Warriors show.  This was definitely the closest seat to the action of the three (see the picture below for our view), it was also the best view for submission attempts and ground and pound work, which is particularly great if you’re a big fan of that side of MMA like I am. These seats were on the ground floor, almost in the traditional wheelchair accessible platform set up that I’ve seen at most gig venues, but I didn’t realise how ow close we were seated until we arrived, so these cageside seats were a great surprise and certainly a welcome perk of this whole wheelchair user situation that is my life! I do wonder whether this seating option still exists for disabled patrons though as it seemed like the arena layout had been changed when I tried to book for CW100 and disabled seating wasn’t available in that area anymore, but it may still be worth checking when you book. The one issue with this specific disabled seating area is that it is sort of felt detached from the crowd and the atmosphere which alters the experience a bit as the party atmosphere at a Cage Warriors show is half the fun. Having said that, I would recommend booking this disabled seating area if it’s the type you need and is available. 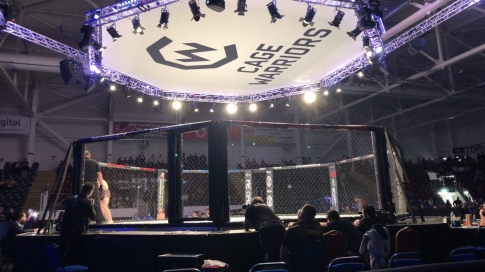 Block 15: We were in Block 15 for CW100 in December. The main change here is that we were up with the crowd (being at the top of the arena with the crowd in the seats below or in seats next to us, which made it feel as though there was more of an atmosphere which improved on the one issue I had with cageside seats. However, the downside of being  up a level (having taken the lift up) is that it was more difficult to see the intricacies of what was going on in the fights. Having said that, there was a screen in front of us which meant were still able to see the submission attempts and such which, as I’ve said before, was good for me with being a particular fan of that side of the sport. All in all, this is probably the seating section I’d most consistently choose (if it was available) given that cageside disabled seating does not seem to be an option anymore.

Block 17: We were in Block 17 for CW104 in April (see the picture at the top of this post for our view). My main point about this seating area is that it’s next to one of the bars, which is cool if that’s your thing but, as someone who doesn’t drink at events, it’s not mine. It also meant there was lots of traffic going past where we were sitting, which meant a night of bumped, barged, accidentally tripping people up with anti-tip wheels on the chair, and at one point being yanked backwards as someone used my chair to stand up. I’m not mentioning all of this for a whinge, it ends up hurting and causing me physical pain after a while and can also be quite claustrophobic feeling like you’re constantly in the way and tripping people up. There was also no screen (unlike Block 15) which made it difficult to  see when submissions were happening (did I mention the submission side of things is my favourite part?) Overall, it was difficult to fully focus and  enjoy the night  when I  constantly had half a mind on being bumped into, and I would not choose this seat again if the choice was offered.