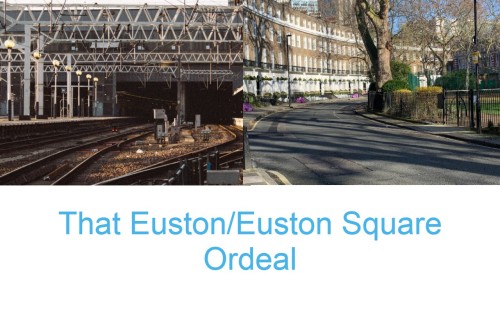 Those of you who’ve been with me for a while will remember my post about my first train trip up to Birmingham for Cage Warriors 98. Now what I didn’t tell you is what happened AFTER we got off the train, between Euston and Uxbridge. Well here’s that story, strap in and prepare because it’s a whole roller coaster ride!

It all started while we were still on the train back to Euston. I saw on the Metropolitan line twitter that the Euston Square tube station (the station I intended to use to get home) lift was broken. That was fine, as I’d just roll on to Kings Cross, which wasn’t that much further. I then saw on a different twitter account that the Euston Square lift was fixed so I reverted back to the Euston Square plan as I originally wanted to. On arrival at Euston, after my incredibly sarcastic answer to “do you need a ramp?” (I mentioned that in the other post but it’s the sassiest I’ve ever been so I shall forever mention it), we made our way out of Euston. In hindsight, we should have probably waited for clear concrete confirmation that the Euston Square lift was working before heading off, but they say hindsight’s 20/20.

On arrival at Euston Square, we found out that the lift was actually still broken. So, with that knowledge, I told the staff I needed a taxi to the next accessible station as is the rule in these situations. I was then told this was not protocol, something that I continued to be told even after I’d shown the staff member a screenshot from the TFL website, and so that staff member disappeared to locate their manager, convinced I still wasn’t telling the truth. Granted, at this point, I probably should have just walked on to Kings Cross about 10 minutes away but I was quite annoyed about being told I was incorrect and essentially lying about being entitled to a taxi to the next accessible station, so I decided to stand my ground. Eventually, the manager returned and said yes I was entitled to a taxi (I knew THAT) and we waited like an hour for said taxi.

In taxi and at Kings Cross

Before I hopped in the taxi, I confirmed that TFL were paying for it, and this was confirmed for me, because the taxi company had a contract with TFL for these kind of trips from an inaccessible station to an accessible one. However, when we got to Kings Cross, the driver requested payment from us, despite already being paid by TFL as far as we knew, and wouldn’t let us move away until we gave him money. So I had to pay £10 I knew I didn’t owe him personally, to be able to go get the train.

Once we were actually inside Kings Cross, we first tried to use the Metropolitan line, but that was out of service between Kings Cross and Uxbridge, so we had to use the Piccadilly line for the same route. This meant my friends phone died and she wouldn’t be able to tap out on exit despite having tapped in on her phone.

When we finally get on the Piccadilly line, I was aware my friend and I were exiting at 2 different destinations, However, that was fine, even though I was in my manual wheelchair, because I knew I was going straight to my destination on a single train and had someone to meet me there. EXCEPT, it didn’t happen like that, the train terminated early at an inaccessible station, even though TFL are not supposed to terminate trains early at inaccessible stations when they KNOW they have a wheelchair user onboard! Luckily, I was able to contact my friend Nikki who was waiting for me at Uxbridge so she could let them know and have them coordinate the situation with the station I was at on my behalf (shout out Uxbridge station for always being super helpful with access in my 4 years living there, and particularly in this situation). I was then then taken off the terminated train and put back on a different train going all the way to Uxbridge, and EVENTUALLY made it back to Uxbridge about 4 HOURS after I left Euston

Hopefully, this gives some insight into what is probably the worst inaccessibility debacle of my time in London